At Monkigras last week there were more women speaking than men. It rocked my world. The ever-inspiring Dr. Lucy Rogers was the only familiar face. Dormain Drewitz, Pia Mancini, Mazz Mosley and Joni Saylor were revelations in the curated line-up. Then there was the unscheduled Linda Peng who seized the opportunity to promote codebuddies. And that’s just the half of it.

My normal status quo these days is to be all-too keenly aware of the gender of tech speakers. Probably because I am constantly being reminded I am a women-in-tech whether I want to be or not. But somehow with a dozen or so women speaking at Monkigras that simply didn’t happen; somehow I forgot to tune into the gender of the speakers at the time.

In hindsight it was a great snapshot of terrific women working in tech, women who are so confident in what they do and comfortable sharing this knowledge with the audience. For one thing Jesslyn Rose is a great speaker and gave us a great visual language for understanding burnout.

BIGGEST TAKE-HOME LEARNING from @monkigras!! Different-sized beakers to represent how one’s mental capacity is not fixed but can dynamically change e.g day to day💡!! Resonated so much personally, huge thanks @jesslynnrose 👏🏼❤️✨ #monkigras pic.twitter.com/1LXkFbSGBm

I have never done pager-duty in my life but Charity Majors still had me hanging on her every word as she laid out tech leadership as it should be, driving points home in ways no-one could forget in a hurry.

Committing code is a lot like giving birth. That little sh*t is going to be your responsibility for almost 2 decades. Even if it was a one-night stand/@mipsytipsy nails an analogy… darkly… #monkigras

Incidentally, the talk that would probably appeal most to my son would be Catherine Dixon and her magical ability to make you care about the size of the letter ‘O’ and see how that makes lettering come alive and seem balanced.

Can YOU spot the sub-optimal letter forms & spacing on this sign in Bloomsbury’s Queen Sq? *Loving* this visually stimulating talk on Invisibility of Typography from @ThinkingType 📖 🎉✨ #monkigras pic.twitter.com/sCfCBngCED

And while we are picking favourites, mine was definitely Mandy Whaley’s talk which transported me to the life and times of Marie Curie and was neatly tied in with open source & crowdfunding campaigns. It was not lost on me that it took the tragic death of Pierre Curie to propel Marie out of the shadows and onto the mainstage. Fortunately we’ve come a long way since then. I think.

.@mandywhaley taking of “the power of heroes”, my daughter got this book for Christmas, includes short stories on Marie Curie and Ada Lovelace, plus 98 other inspiring women. #monkigras #WomenInSTEM https://t.co/oMnK9e1hrJ

And what I discovered while listening to the talks, not tuned into gender, was that I could focus on something else: the overarching theme was a call for sustainability in tech & other domains. For instance, I learnt that distressed jeans are not so great for the people creating them. I’m not ready to give up on jeans but I’d like to be better about where I get mine from (babysteps to Patagonia maybe?).

In tech itself we need to figure out how to bring people together to build technologies that last and how to take care of ourselves and each other so we can keep doing that. These are issues for everybody: men as much as women. We need to do this together.

And that’s what I experienced happening at Monkigras. Once tech figures out how to deal with gender imbalances, we can truly all move together onto new horizons. Building sustainable worlds and resilient societies.

I always want more time in my day. And that’s because I waste all my time trying to think of new ways that would save me time. Which brings me to Github pull requests. One thing I often wish for when reviewing a Github PR: why can’t I quickly jump to the definition of a method being used? Or see where else that piece of code is being called from? Some quick code navigation features would help me do reviews better and quicker. I’ve been spoilt on code completion features in Eclipse IDE and now I want them everywhere. Luckily I get to be in a position I can aim to make that happen.

In thinking about how we can make developer tools and features ubiquitous, I came up with my latest talk: the future of IDEs. I first did this talk within the Internet of Things domain at Thingmonk and had some great feedback.  James Governor of Redmonk had this to say about it:

Tracy Miranda, founder of Kichwa Coders, gave us a whistlestop tour of the future of dev tools for IoT. Miranda is a fixture in the Eclipse community, but did a great job of laying out the tools landscape. And of course Microsoft Visual Studio Code got a favourable mention (so much love out there for Code right now, it’s the modern goldilocks text editor). That said, for programming digital twins, she argued we’re going to need visual tools and models, beyond a text editor. Node-Red of course also got a mention.

This talk covers everything from the massive fragmentation with languages and frameworks to making our developer tools more visual, smarter and really so they work everywhere. Even in Github PRs. If you work in developing tools or have strong opinions about how developer tools should work, then this talk is a must watch.

After Thingmonk and the great feedback, I got to refine the talk and present it at Jax London as the ‘Future of IDEs‘. That talk wasn’t recorded but we did manage to have a quick chat about it afterwards, check out the short version (+ extras) here: 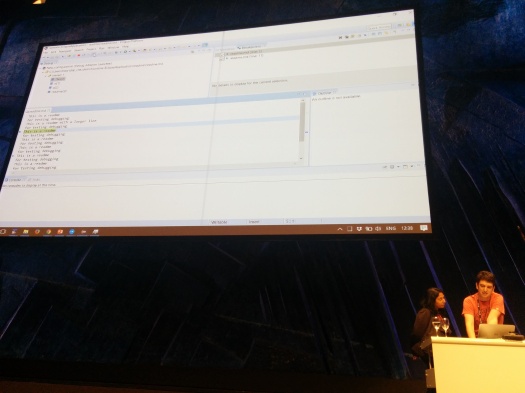 There’s an increased level of discussion on improving diversity in tech communities. Or maybe it was always there and I just started paying attention. Either way, it’s a really good thing. But in the mix there is definitely a certain amount of diversity-led marketing e.g “We need more women-in-tech! Women, sign up for this tech course here…”.  Some are more obvious than others.

What about tech conferences? Take the case of a tech conference getting some promotion off the back of free diversity tickets. Is that just diversity-led marketing and a bad thing? After all it’s great to get underrepresented folks into conferences, right? The answer is if it is done in isolation then it is probably just self-serving marketing and pr. Underrepresented folks aren’t merely props for your agenda

Diversity is complicated. It’s easy to get it wrong and end up like the conference organizers who violated their own code-of-conduct and had a speaker cancel their talk.  Or fall into the Google case of  trying to inspire teen girls to code while simultaneously systematically limiting the careers of women in your company.  Again diversity is complicated, so we all want to focus our energies on those doing it the right way.

Open source has a worse record than most when it comes to diversity.  At this year’s Eclipsecon Europe, as with every tech conference I attend, I did my own evaluation of what’s being done well and not so well. This year, I noticed a few companies who are doing something right as evidenced by the women and underrepresented minorities that are in leadership positions.

These three companies set a great example for the rest of us, not to mention make us better at our work as a community. Which brings me to the picture at the top of this blog post. I like to get setup really early before I do a tech talk, especially one in a huge room with a massive screen. So while getting setup, Jonah Graham of Kichwa Coders and Sarika Sinha of IBM got into a discussion about debugger protocols and threading issues. To discuss the finer points my laptop was commandeered and out came the code. It was one of those serendipitous moments and I didn’t want my pre-talk nerves to stop them. So I took a seat and took pictures while taking deep breaths. I think my talk went well anyway. That one conversation really informed our thinking on our work on the future of debuggers. And really it reminded me in a powerful way how things are always better the more different types of people you get involved. And little moments like these make it all worthwhile, and worth doing right, in the best way possible.

Our absolute favourite type of talk to do is one where we’ve been working on something so cutting-edge that we don’t have all the answers yet. This was the case with our work on the debug protocol and our talk at EclipseCon Europe. We got to take where we’d gotten to and present it to a room full of smart people who were generous enough to show up, ask questions and give us their insightful feedback.

The talk gives an overview of the debug protocol then demonstrates it working in:

We demo 7 different types of debug functionality as supported by the protocol: END_OF_DOCUMENT_TOKEN_TO_BE_REPLACED

The next generation Spring Boot tooling has been completely refactored to be based on the language server protocol (LSP). The tooling covers things like code assist for the Spring Boot property file, support for Cloud Foundry manifest files as well as Spring Boot support for Java files with typical features such as validation, content-assist and quick-fixes.