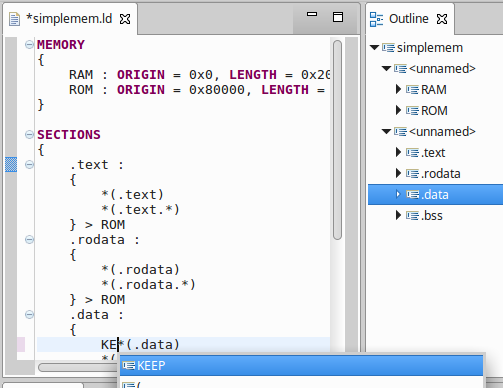 Xtext is the popular Eclipse language development framework for domain specific languages. Its sweet spot is JVM-languages and it is excellent for languages where you can define the grammar yourself. But how well can Xtext cope with a non-JVM language that has undergone decades of evolution?

In our case, we want to see if we can take advantage of Xtext to create an editor for C/C++ linker scripts in CDT. Linker scripts are used to specify the memory sections, layouts and how code relates to these sections. Linker scripts consist of the ld command language, and this is what a simple typical script might look like:

Besides using Xtext, its worth considering some of the other options there are for this task:

The Xtext framework additionally provides these nice features we are interested in:

When we talk about the ld command language being a non-JVM language, here are some specific challenges related to what that means.

In the grammar 2+3, for example, depending on context, can either be an identifier or an expression:

The first 2+3 is a filename, so almost anything that can be a filename is allowed there. The second 2+3 is an expression to be assigned to symbol.

Here’s what we did to support the linker language as far as we could:

Xtext is a great language development framework. While Xtext may not be able to support every theoretical case of the long-lived linker script command language, it can be used to provide a very high level of support for the common features. Support for context based lexing in the future would enable a higher level of language support. Xtext can be used to provide a rich language editor with syntax colouring, command completion, integrated outline view & more in a relatively short space of time. A powerful linker script editor is another great feature for C/C++ developers that use CDT, the reference C/C++ IDE in the industry.